Wing Chun Academy Associations - Sweden (WCAA-Sweden) was founded in December 2005 by Peter Yeung as a Wing Chun KungFu (martial art) school on an academy level for Wing Chun associations, is the meaning of the name Wing Chun Academy Associations. The academy's level of school means it is providing an academic level of pedagogical education of Wing Chun as art rather than acting as a training provider, one of the goals is to provide higher education of the Wing Chun martial art and how to apply the art in a situation.

Within the WCAA-Sweden hobby business concept needs also own Java software development & operations (DevOps) of WCAA-Sweden Mobile/Web IT application tool i.e. for education tool and automatic information/business processing in order to achieve distance learning of the Wing Chun theory with team collaboration, privacy data handling for compliance with IT security, etc. This requires fully own developed and hosted IT solutions for complying with the WCAA-Sweden concept and EU GDPR regulations - 2016/679 regarding privacy data protection. This results in high costs for IT operations, IT solutions, and development, WCAA-Sweden is therefore also applying DevOps.

Wing Chun Academy Association Sweden (WCAA-Sweden) is acting as a supplier to organizations/associations and individuals with Wing Chun services and education framework under the WCAA-Sweden brand, this means that WCAA-Sweden is financially separated without any legal responsibility towards sub-organizations, see our agreement. This includes complete service offerings directly to members/students of the association Wing Chun Academy IF Stockholm (WAIS) or to other academies/associations. WCAA has terminated its association relationship with WAIS.

WCAA-Sweden's aim is to provide high-quality and deep Wing Chun learning for a budget price so that students without a high budget can learn a deeper level of Wing Chun to become an instructor or teachers. Therefore WCAA-Sweden is trying to achieve a small group of motivated students since the business goals are for spreading deeper Wing Chun rather than aim for profit. Therefore WCAA limits the number of students in this school by putting higher requirements on the candidates that apply for becoming a student.

Information about the past  WAIS

But from 2020-01-20 WAIS was closed as a registered association but will continue to be a discussion forum for WCAA students.
WAIS was a non-profit association (ideell förening) registered at Svenska Budo & Kampsportsförbundet (SB&K) a federation under Riksidrottsförbundet (RF), this means that WAIS is a member of the sub-federation Swedish Kung Fu and Wushu Federation.
WAIS's objective was to be a student association forum for Wing Chun training and education decisions using E-democracy in cooperation with Wing Chun Academy Association - Sweden without its own business (verksamhet). Therefore, WAIS has no financial or economics and does not either apply for any financial contribution (bidrag).
The WAIS fee to Svenska Budo & Kampsportsförbundet (SB&K) was paid by WCAA-Sweden as part of WCAA-Sweden student service offering.


Members of WAIS had an accident insured via SB&K for training accidents. More information at http://www.budokampsport.se/försäkring
WAIS does not have any economy of its own, so WCAA-Sweden is, therefore, acting as a service supplier with the complete operation of WAIS i.e. as Wing Chun Academy Association supplier.

All WCAA students train Wing Chun under their own responsibility and with their own insurance.

The relations between federations & WAIS as references

Our Wing Chun Kuen 詠春拳 is mainly direct from Grandmaster Sifu. Ip Chun 葉準師父 in Hong Kong i.e. one of the first Wing Chun academies in Sweden with the shortest lineage.
Grandmaster Sifu. Ip Chun (born July 1924) is known as the eldest son of the famous legend Ip Man 葉問 (Yip Man).
The legend Ip Man 葉問 (Yip Man) is also known as the Sifu for the past KungFu movie star Bruce Lee 李小龍, but more today in the different Wing Chun movies, especially in all famous Ip Man movies, Sifu. Ip Chun has also acted in the movie The Legend Is Born: Ip Man . 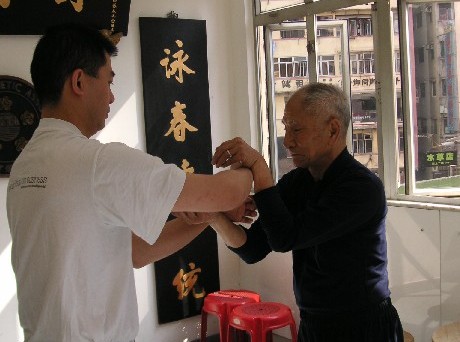 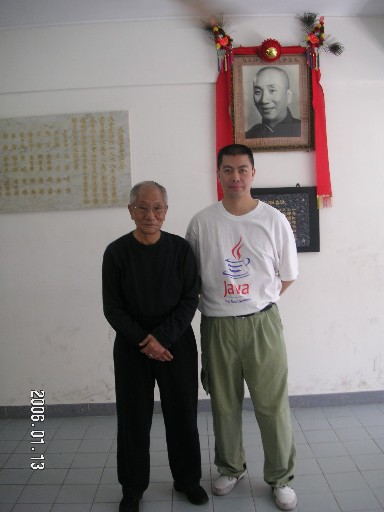 To make every Wing Chun student become a high-quality WCAA Wing Chun instructor/pedagogues with holistic competencies for easier to start and drive an own Wing Chun academy or association (förening) with ethics, morals, and respect.

The mission is to spread the traditional soft/internal Wing Chun Kuen 詠春拳 KungKu 功夫 in Sweden. This includes philosophy, Cantonese culture, ethics, and conception of life.

Goals are strategies to achieve the vision and mission

WCAA has an evangelical Christian ethos and values. Openness, trust, and care within the team are important.